DANTE and the TEIN* Co-operation Centre (TEIN*CC) signed a Memorandum of Understanding on 26 August 2012 at the 34th APAN Meeting in Colombo, Sri Lanka to to collaborate on projects to benefit the research and education community in the Asia-Pacific region.

DANTE and TEIN*CC will capitalize on TEIN4 activities and plan to promote the long-term sustainability of research and education networking in Asia Pacific and Europe.

The scope of collaboration between DANTE and TEIN*CC includes the following aspects: 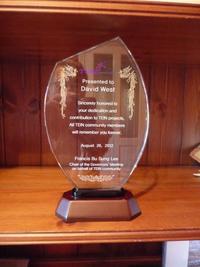 part of a ceremonial handover from TEIN3/DANTE to TEIN4/TEIN*CC, David West, DANTE's TEIN3 project manager, was awarded a plaque from the TEIN community in recognition for his efforts to make TEIN a regional success story.